The Nativity Open Day was held at Dodding Green on Saturday 5th December.

Unfortunately this day also happened to be the wettest day on record in the Cumbria area with Kendal being hit by torrential rainfall and severe flooding.

However, the open day went ahead with a limited programme despite the reduced number of visitors who managed to get through the floods under almost impossible conditions.

Those who attended enjoyed the morning prayers and rosary followed by Holy Mass in the afternoon. Parents came from England, Ireland and Europe to see and pray with their sons, and two Consecrated from Cenacolo Italy supported the event.

A coach full of Cenacolo supporters from Liverpool failed to arrive, despite several attempts to get through the floods, finally returning to Liverpool. The day was not wasted because they all gathered at Fr Michael’s Church and held their own ‘Open Day’ which was thoroughly enjoyed by all who attended. 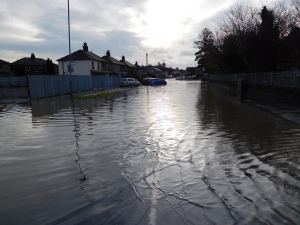 Some casualties from Birmingham who were caught in the floods had a dramatic experience. Their car was abandoned and they were welcomed by a local, caring family into  their house. Drenched, cold and hungry they shared an upstairs room with the family for the night and found that the water level reached half way up the staircase. Although it was a dreadful experience, no one was  harmed and someone said in jest that it will be a great talking point for years to come.

I was also an interesting experience for Bruno who had been transferred from Italy to Kendal on the day before the event. When asked how he liked his new house he replied  “is it always this wet”.

The highlight of the week end was the arrival of three little piglets born on Sunday morning oblivious  to the lashing rain and floods all around them.