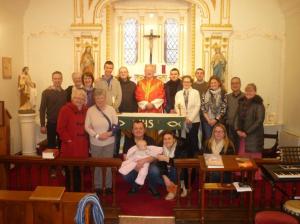 An 80th Birthday celebration is a high point in anyone’s life and would generally be celebrated with family and friends. And so it was for the celebration of M Elvira’s 80th birthday but with a difference, her birthday was celebrated in many venues across the world by those who hold M Elvira in great affection, respect and love for all that she has done as God’s instrument in helping many thousands of young (and not-so-young) people walk from the darkness to the light.

At Dodding Green the Mass of St Agnes was offered and the scripture for the saint could have been chosen for M Elvira; we heard how God choses what the world would dismiss and overlook to fulfil his plans. After Holy Mass a ‘bun fight’ was held with good conversation and memories of M Elvira shared.